There is so much to do at the Summer Festival!

Picnicking on the Grounds
Bring a picnic and dine during the Summer Festival pre-show entertainment. Remember seating is general admission, so bring on your own blanket or lawn chair. And if you don’t have time to pack a picnic, a selection of sandwiches offerings from Janssen’s Market will be available.

If you have a particularly lush spread, let us know and be entered to win the Janssen’s Market Picnic Contest. We’ll take a picture of your picnic, and post it on social media with other entries each week. At the end of the run, our favorite picnic will be selected as champion! You win Shakespearean bragging rights, along with a gift card to Janssen’s and free tickets to the 2023 Summer Festival.

Show Orientation
40 minutes prior to showtime. Two actors from the production offer insight to the evening’s play and production choices.

Children’s Activities
Only on Family Nights (Sundays). Bring your children early to enjoy various Shakespearean-themed arts and crafts at our Children’s Activity Tent. Tent remains open during the performance! 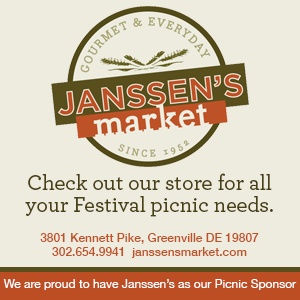 Co-writers Liz Filios and Tanaquil Márquez share their excitement and hopes before this weekend’s concert presentation of TWELFTH NIGHT, O LO QUE QUIERAS. Q: You’ve been developing this piece for 2 1/2 years. What gives you excitement about sharing the music with audiences for the first time next weekend? LIZ: It’s hard to believe it’s […]

Daniel L. Melo, Sebastian in the upcoming TWELFTH NIGHT, O LO QUE QUIERAS in CONCERT event at Rodney Square shares a few thoughts about preparations for the program. DEL SHAKES: We’ve been developing this musical for 2 1/2 years, but this is your first experience with it. What are some of things that you’ve appreciated […]

Del Shakes is beginning a strategic planning process to imagine what’s possible for the company as we serve the community over the coming years. We’d love to hear your thoughts on the future of Del Shakes! Your experiences and ideas can help shape the path forward. PLEASE TAKE THIS 10-MINUTE SURVEY Survey respondents may choose […]

As part of its Antiracism, Access, and Equity Policy, Delaware Shakespeare committed to ongoing antiracism training for Board and staff. In 2021, the training took the form of an eight-part monthly Antiracism Learning Discussion. The discussions were focused on approximately 20 hours-worth of articles and videos originally compiled for New Repertory Theatre (Watertown, MA) under […]

The Del Shakes Artistic Squad is a rotating collective of artists that is part of the creative leadership of the company. You can read more about the Squad here. Artists serve two-year terms. Each year, we welcome two artists on, as two artists rotate off. In January 2022, we had our first planned rotation. Newton […]

We envision a Delaware where people from all walks of life celebrate and explore their shared humanity through the lens of Shakespearean works.
Read More